I find it interesting that we’ve only had a few weeks of “real” winter weather. Most of the time it has been really mild weather, but today was ridiculous. It was 80 degrees. In January. It makes me shudder to think what summer will be like…but anyways…with the weather the way that it’s been, Joseph hasn’t really had a chance to wear the cute winter stuff that we got him. Thank goodness for dress-up days! 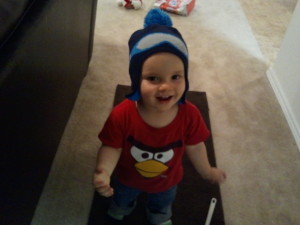 In other news, I have realized that one of the funnest things about the age that Joseph is at is the fact that I can dress him up in cute outfits (he has Star Wars shirts, Transformers, The Beatles, Angry Birds, Captain America…pretty much anything that Paul and I like, lol). We discovered a while ago that we could get him onesies that look like Star Trek uniforms. These have been a favorite of ours for a while. My only minor complaint is that the neck-holes are a little on the small side (either that, or our kid has a larger than normal head, which could totally be the case, lol). 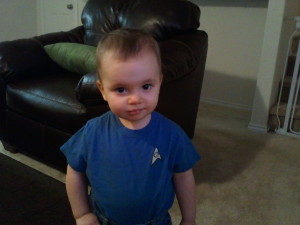 Doesn’t he look thrilled? lol He’s probably tired of me taking pictures. I could seriously do it all day. 🙂

It’s hard to believe that our little man will be 18 months old in just over a month. We are all looking forward to nursery. Joseph knows that there are toys and other kids in nursery, so (we think) he’ll be pretty excited to get to go. He LOVES playing with other kids. Paul will be excited to finally get to stop walking the halls during the second and third hours of church (since I’m serving as the Primary pianist). I’m excited because…well, because I have a feeling that he’s really going to love nursery, and anything that makes him happy, makes me happy.

Here’s a little bit of what we’ve been up to: work for Paul is going really great. He loves his job, and really likes getting to interact with people from all over the world. I love being able to stay home with Joseph. Every day is an adventure. Like bath time. Joseph LOVES bath time. There was a short period of time that he was scared of bath time (even though he never had a problem before). We now think (after reading about it on the Internet) that he became scared of being sucked down the drain with the water. So after a couple weeks of no baths (though we attempted to give him one several times), and a few rocky starts (crying when he first went in, but fine after a few minutes), we got him back into the tub. He has a few new toys and we no longer drain the tub while he’s in it (oops, rookie mistake, I guess…I had no idea he could develop such an irrational fear). He’s back to loving it now, which I am grateful for, but now it’s hard keeping the WATER in the tub. He’s quite a vigorous splasher, lol. He’s also getting more and more responsive every day. He uses lots of hand gestures to get his point across. When he doesn’t want to do something, or doesn’t want something, he won’t just say “no”. He says, “No, no, no, no” and either waves his arms at us or shakes his finger. When everybody raises their hands to sustain someone at church, he has to raise his hand, too (though not always at the correct time, lol), When he wants us to pick him up, he’ll reach his arms WAY up and open and close his hands in a grasping motion (what parent can ignore that?!). His vocabulary consists of: no, uppp, tek-oooh (thank you), baby, dad, daddeeee, mommm (emphasis on the last “m”), mommy (only in dire straits), woof-woof (in reference to any dog), yessss, and beebee (different than baby…he pats his stomach when he says it, so I think he’s trying to say “belly”). He loves watching Dinosaur Train, Super Why, and Thomas the Tank Engine, he loves playing with anything with wheels, he likes going out, even if it’s only for a walk to get the mail (instead of each house having their own mailbox, we have a whole set of mailboxes all in one area. It’s just down the street, so it’s an easy walk), and he loves swinging in the swing that Paul attached to our back patio. He is such an easy-going, mild tempered, sweet little spirit. We are SO blessed to have him in our lives!