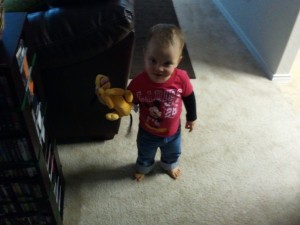 I guess the holidays really caught up to me. I haven’t posted since right after Thanksgiving. I suppose a little catch-up is required. December sped by as we enjoyed ward Christmas parties, a visit to Bass Pros Shop to see the decorations, 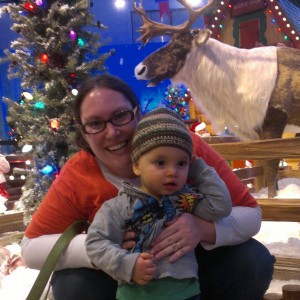 a drive out to see a neighborhood that went all out with Christmas lights/decorations, and just day-to-day life with our little family. Christmas was pretty fun this year, since Paul was home for it (yay!) and Joseph was actually big enough to care about it (last year he was just a snuggly almost four-month-old who cared more about sleeping and making sure he got fed on time). We did a “want, need, wear, read” Christmas. That meant that each family member got one thing they wanted, one thing they needed, one thing to wear, and one thing to read. It really simplified things and kept (mainly me) in check with buying stuff for Joseph, lol. Paul got tools, an electric razor, wireless headphones, and the first book in the Wheel of Time series. I got a new laptop, a handheld vacuum that I can use for our stairs (yay!), a new Nightmare Before Christmas watch, and a new cookbook. Joseph got a Fisher-Price Little People pirate ship, new pants, a couple of books, and a small Percy (from Thomas the Tank-Engine) in his stocking. He loves playing with his pirate ship! 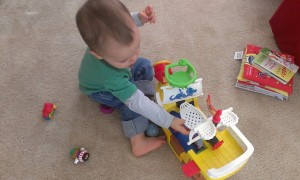 He likes taking the pirates out and putting them back in, sticking the parrot on its perch, and trying to launch the cannon. He also likes taking the crow’s nest and flag off and hiding them in places for me to search for later. Other things that he’s been up to: getting better at walking, working on running, starting to eat more table food (in very, very small pieces), cutting his molars, seeing what mischief he can get into when left unattended for even a short amount of time (this morning I came out of our bedroom after having gotten ready for church and found the printer paper scattered ALL around the loft), and becoming an all-around copy-cat-cutie (he’s starting to repeat short words after he hears them and basic actions…just yesterday, I was helping him walk down the stairs, so I decided to count the stairs. I said “one” and he chimed in with, “two!”, which he repeated after each number that I said, even if it was not “one”). One thing that I’m doing this year is keeping a jar set aside so that we can write down funny or good things that happen all throughout 2013, put them in the jar, and next New Year’s Eve we get to open the jar and re-read them all. That one definitely needs to go in the jar. One fun thing that happened that I haven’t blogged about yet is the fact that we got to do several web-cam/Skype conversations with family. We got to talk with Mom and Dad and Aaron Hall’s family during Thanksgiving, with Paul’s brother Jason and his fiance Lisa on Christmas Day, and with Mom and Dad and several of the siblings just after Christmas. Another fun thing that happened in December was that we got to go to Houston to visit Kelli (Perkins) and her family. Uncle Andy and Aunt Diane were there, along with Ally, her husband, and their son. We went the Friday after Christmas (Kelli’s daughter, Sara got baptized the Saturday after Christmas. She asked me to give the talk on the Holy Ghost since she thought it was cool that we had the same name (I love eight-year-olds!). We stayed until New Year’s Eve and then drove home. We relaxed for a few hours and then the craziness began. Growing up in Southern California, the only fireworks that the general public was ALLOWED to get were really more like firecrackers. Here in Texas, there is so much more that’s legal. The neighborhood next to us is up a little higher, so looking out our bedroom window was like getting to see 3-4 professional shows. I knew aerials were legal, but I had no idea that mortar fireworks were legal. There was the occasional burst earlier in the evening, but midnight was crazy. It went on for about an hour. Joseph thankfully slept through all of it, or else we would have had one cranky little man in the morning. It will be interesting to see what Fourth of July will be like. I have a feeling that we’ll just be able to put some lawn chairs in the front yard and enjoy free (to us) shows. New Year’s Day we took down all the Christmas stuff and life is returning to normal.