It is insane how much has happened in a week. I don’t think that I can write it all down, so I chose four major things and I’m throwing in a bonus story that I forgot to write about earlier.

Story #1: The Dreaded Vacuum. This happened about 3 weeks ago. I pulled out the vacuum after a long hiatus. After committing my huge faux-paux with Joseph’s bath time (see previous post), I decided that I would be a little more careful about vacuuming with Joseph around. I mean, who knew if he would think that the vacuum could suck him up?! It turns out my concerns were not totally unfounded. While he didn’t freak out when I turned the vacuum on, he looked very, VERY concerned. I made sure not to point the vacuum directly at him, and he started to warm up to the idea. Then I took the vacuum upstairs. Where his toys were. That’s when it changed from interesting to hysterical. Joseph would take a toy, run up to the vacuum, and (almost) fearlessly toss the toy in front of the vacuum. He would then retreat to a safe distance to observe the effect. I came to the conclusion that he was doing an experiment to see if the vacuum would suck up the toys. When I finally got control of myself (for some reason, the whole escapade struck me as being quite amusing), I showed him (via putting the vacuum right up close to the toy) that the toys would not, in fact, get sucked up. He’s been fine with the vacuum ever since, lol.

Story #2: Waving bye-bye. This one is short, but sweet. We have been trying for a while now to get Joseph to wave bye-bye to people. For a little bit, he would wave, but almost always after the person had already gone. Just recently, he has gotten the hang of it, and now he waves bye-bye all the time. When Paul leaves for work, when my visiting teachers leave, when we leave after we’ve gone visiting teaching, when he says good-night to Paul, and…perhaps best of all…to ANY random person in a store. Yet another thing that I am ridiculously proud of and amused by. 🙂 Oh, and he’ll also do his own version of the sign “all done” (which is done by taking your hands and flipping the palms forward and backward) when he’s done with his food. Joseph’s version is more like waving his hands up and down, but considering the fact that he says “ah doe” when he does it, you can catch the meaning.

Story #3: The Bow-Tie: We recently decided that we needed to get Joseph some “real” church clothes. I was able to find him a couple of button-down dress shirts (he already had pants) and…some ties! I was excited because they are not clip-on ties. They have a loop of fabric (which is adjustable) that fastens in the back. Best.invention.ever. So now Joseph has a regular tie and a bow-tie. He wore the bow-tie to church today and got SO many compliments (I guess it helps that he looked ridiculously cute)! 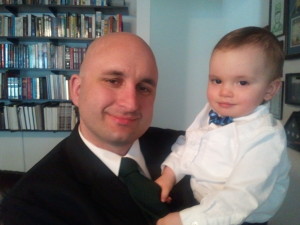 Story #4: One, Two, Threeee! Another one for the record books. Not too much explanation, since there’s a video. I believe I posted about Joseph saying “two” after I would say “one”. Well, he’s now added “three” to that…only he seems to be under the impression that fun things happen when you get to three (it could POSSIBLY be from his experience that when we spin him in the computer chair, we count to three and then he gets to spin). Well, he decided to take things into his own hands. Enjoy!

Story #5: Gimmie “5!” Just tonight, we got Joseph to give us “5”. This is after many failed attempts by other people to get him to do it and Joseph looking at them as if they had lost their minds. Tonight I decided to show him by giving Paul “5” and then make the attempt again. Well, it worked better than I imagined. It only took him one time of seeing it before our little monkey was able to do it. 🙂