This week has been pretty great. Joseph has been surprising us left and right. Whether it be by deciding to be a daredevil, or by accessorizing himself…it’s been an adventure. He’s shown us how quickly he can pick up on a new action, as well as how quickly he can blurt out new words (this week, the main one was “Thomas!” when he saw Thomas (the Tank Engine) and Friends come on). He’s discovered Blue’s Clues (and LOVES it). He’s also decided that play-dates are AWESOME (he was a lucky boy and got three different play-dates this past week). He gets super-excited when we go on walks, too. He loves being outside (which is so much better now that the weather is warming up) and usually fusses when it’s time to come in. Here’s a few photos that describe perfectly how our week went:

Today was Easter, so we decided to do some fun stuff with Joseph. He loved seeing his Easter basket full of fun stuff (A dark chocolate bunny, a new board book, and a new toy truck). Once he discovered that the truck made noise, that thing captured his attention for quite some time.

Paul hid some plastic eggs (filled with goldfish crackers and stickers) in different parts of the living room for Joseph to find. Once he caught on (after the 2nd egg), he got into the hunt.

After his egg hunt, we decided it was time for Joseph vs. his first-ever chocolate bunny (we got him a dark chocolate one since dark chocolate has the least amount of milk-fat which means the least amount of lactose for our little lactose-intolerant guy). We put him in his high-chair (shirt-less) and let him have at it. At first, he didn’t really know what to do, but then he tasted it a little. He mainly had fun finger-painting with chocolate. 🙂

After a much-needed bath, lunch, and a nap, we got ready to go to church. We picked up a sweater-vest for Joseph to make his church outfit a little more special for Easter. I think that we have one of the cutest little babies in the WORLD!

We had a good time at church…Joseph is still in love with nursery and loves the other kids there. Paul said that when they first got in there today, there were some kids that were having a tough time and were crying. Joseph has always been sensitive to other’s feelings (especially other children). Paul said that Joseph tried to comfort a few of the criers by giving them hugs (which they weren’t too receptive to, but we still thought it was pretty sweet). When we got home, Paul got dinner ready while I fed Joseph dinner. Before getting his dinner ready, I was able to catch this cute little scene:

Our dinner was SUPER yummy. Paul made lamb chops (on the BBQ) with a really good rub/marinade, boiled red potatoes, and a salad. Yum! 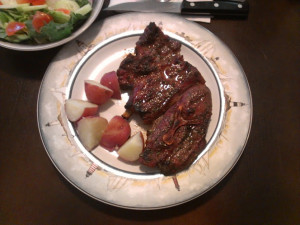 Finally, to wrap up the evening, we went for a walk around the block. Most of the day was muggy and overcast since we had a thunderstorm coming in. When we left for the walk, it was a bit more refreshing, and I was able to take a picture of a beautiful sky :

What a wonderful reminder of the beauty that Heaven;y Father has created!